Tiling and tessellation with a Context Free Grammar - Part 2

In my previous blog post we looked at how to use a Context Free Grammar to make simple grids of circles and then use colour variation to produce a rainbow effect. Now let's look at making more interesting patterns of shapes.

First let's draw a series of ever decreasing, spiralling triangles... 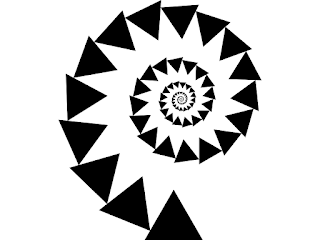 Play with those numbers in square brackets to produce something you like. Remember, r=rotation, x=x translation, s=scale. 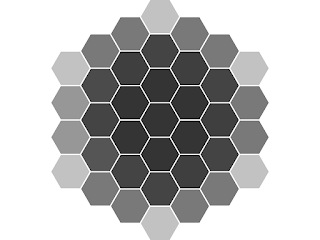 There's a few new concepts in this code:
As with previous examples, play with the numbers, or add in extra adjustments to create something you like.

You may have noticed in the previous example that we drew many hexagons on top of other hexagons, resulting in dark hexagons in the centre of the pattern. As an alternative we can instead draw just two outer shapes, positioned at alternative angles (in this case -60˚ and 60˚), the effect of recursion then fills the plane. 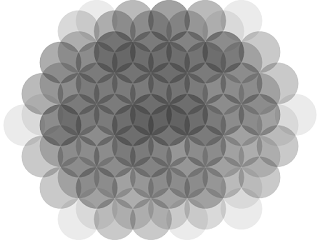 Let's introduce a few variables to make playing with the numbers easier. This code is the pretty much the same as the above, but with the angle and space set at the start of the program (and red dots): 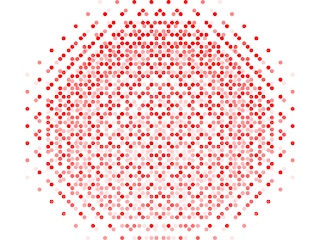 What next? Let's explore tessellation with regular shapes such as pentagons, hexagons and heptagons... (coming soon)
Posted by Eric Clack No comments: